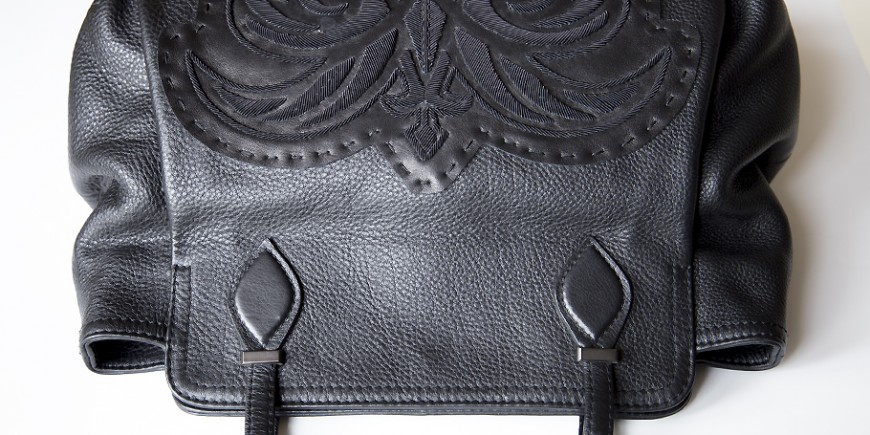 We presented our first collection of bags decorated with Cannetille embroidery at the Parisian "Première Classe" show which took place in the Tuileries Garden, in October 2009. The first embroidery was done in a traditional way and identical to the technique of the sixteenth century, the Embroidery was thus performed on fabric. The idea is to create a feeling of old embroidery, miraculously found and applied to modern leather bag shapes. To reinforce the "vintage" effect we frayed the outlines of the cotton base on which the embroidery is made. The effect was fantastic ... but not satisfying enough to our tastes.

Then guided by the desire to create the exceptional, we began to explore, with our embroiderer, the possibilities of realization of embroidery on the leather. After a few missed pieces we finally managed to develop embroidery on a skin of leather lamb! Indeed the work was complicated for the embroiderer who had to spend much more time on an embroidery. A little reminder of the technique: each spiral of the purse must be cut to the desired size and sewn by hand using a thread and a needle that passes through each small tube and which fixes the small pieces of cannetille, one by one, to create the pattern. The greatest difficulty is to cross the lambskin which is much denser than the fabric and to do it properly, because the fault is unforgivable: the needle leaves a hole that will never disappear. But our efforts paid off! The effect is absolutely masterful!

When the embroidery was finished and cut to be applied to the surface of a bag, it was not conceivable to use a sewing machine. This exceptional embroidery, sewn on the lamb hand was also applied by hand. This is a good way to emphasize the beauty of the work.

Besides, I never stop to admire the surprising precision and accuracy of the work of our embroiderers. It's hard to imagine, when you look at these pieces, that they are made by hand. And it's only tiny asymmetries or slight differences in curves that testify that the work is done by a human...